Skin Funiversian Militaries is the best choice if you're going to cosplay some historical events related to army and battle actions. Each troop represents one of the biggest countries, so you'll be able to try the appearance of each country's soldiers.

The skin pack will become the best decision if you're going to make a kind of a reconstruction of one of the most famous battles in different points of the world. 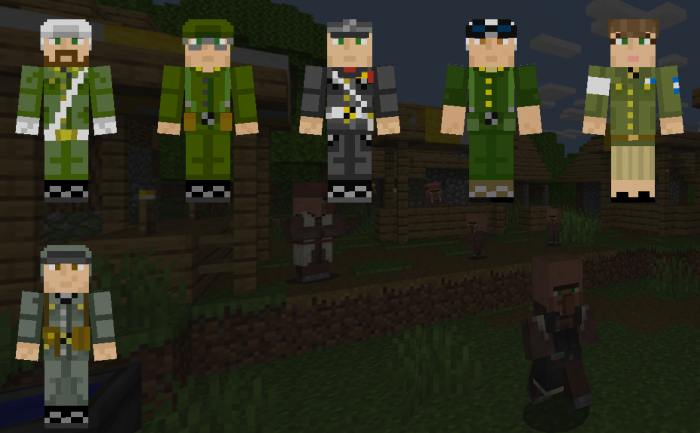 The pack consists of 5 diverse and interesting troops. Each of them has unique elements and colouring. Each player will be able to find something for himself.
The first troop is a Funiversian troop which prototype is a uniform of a US military police used during the 1940s.
The second troop is an Auberian soldier. These guys' skin looks like the uniform of a US marines 1940s.
The third skin is dedicated to the Canadian Military Police used during the 1950s and called "Pommetopian troop".
The next troop is a nurse troop. The same uniform was used by the nurse corp of the US army during the 1940s. It's called Terebellium troop.
The last but not the least, the uniform based on the Wehrmacht uniform of the 1940s. It's called the Volker Troop.
Enjoy new skins together with friends and Download skin Funiversian Militaries for Minecraft Bedrock Edition 1.11 for Android. Look for more
Mods , Skins, Seeds and Maps for Minecraft 1.11 by these links.