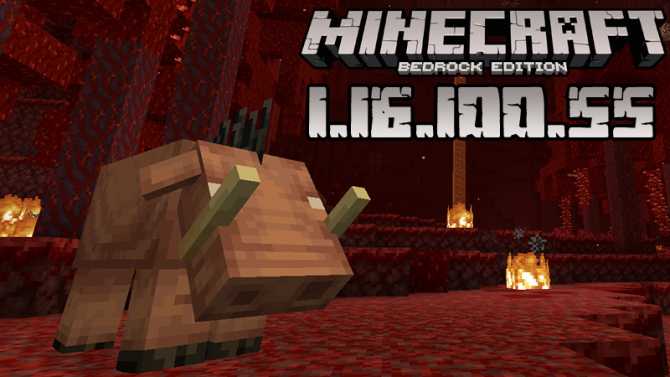 (Rating: {rating_nums} - votes: 10)
Last week the hard-working Minecraft PE developers released not one, but two game updates: Minecraft PE 1.16.100.54, a beta bringing a very long list of changes, and Minecraft PE 1.16.40, a nice and stable full version. The developers did not consider that by doing a double job last week, they can take a break, so here is another beta for us to try and enjoy. Let’s meet Minecraft PE 1.16.100.55.
Please remember that the builds created in beta versions are less stable as those created in full versions and that you cannot play in Realms and with full version users while trying a beta version.
Another important thing you should know before installing a new version is that you should make a copy of your existing MCPE world because otherwise you might lose it.

Probably you will notice that some of the features seem familiar to you. This is because some of them have been present in the previously released versions.

In addition to the above-related changes, the MCPE developers continued their work on the technical part of the game by fixing some detected problems and by introducing several changes.
If you want to try the present beta, watch the video trailer below, click on the download button, share the news with all your friends, and leave feedback.
Subscribe to our website and you will always be up to date with the latest game versions and with the most popular texture packs and other MCPE-related articles with free download buttons. Have fun!