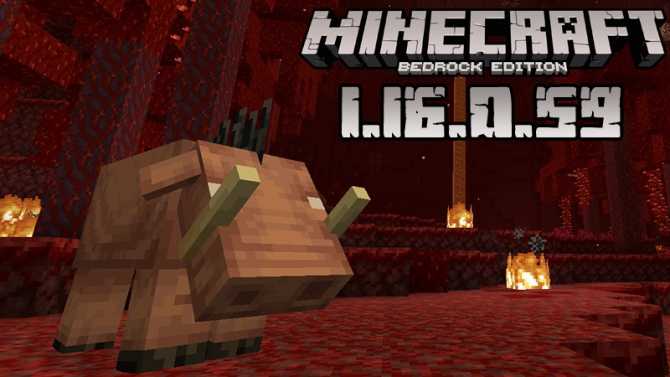 (Rating: {rating_nums} - votes: 38)
Before getting to the new changes, let us tell you a few words about Minecraft PE 1.16.0.59. By the fix list size, it is slightly smaller than Minecraft PE 1.16.0.57 but definitely more complex than Minecraft PE 1.16.0.58, even if it contains only fixes, no noticeable changes, or new features.
1.16.0.59, like the previous two versions, is a beta that will replace your existing Minecraft world, so please back up your builds to avoid losing them. Also, mind that the worlds build in this beta cannot be accessed using earlier versions, so it is recommendable to save copies of them too.
Unfortunately, while trying it, you won’t be able to play with non-beta users and in Realms and the builds created in might not be as stable as those that would be created in a full game version, but until then, let us see what its features are.

Inevitably, one more crash was detected. This time it used to occur every time the player attempted to stack different types of slab together. Of course, the crash was removed, but of course, this is not the only problem the developers had to work on.

This is more or less everything you will discover if you choose to try the present beta. Please share the good news with other MCPE players and leave feedback to let us know about your opinion on it.
Follow our website to always be up to date with the newest game versions and with a lot of other Minecraft-related surpises. Have a great time!