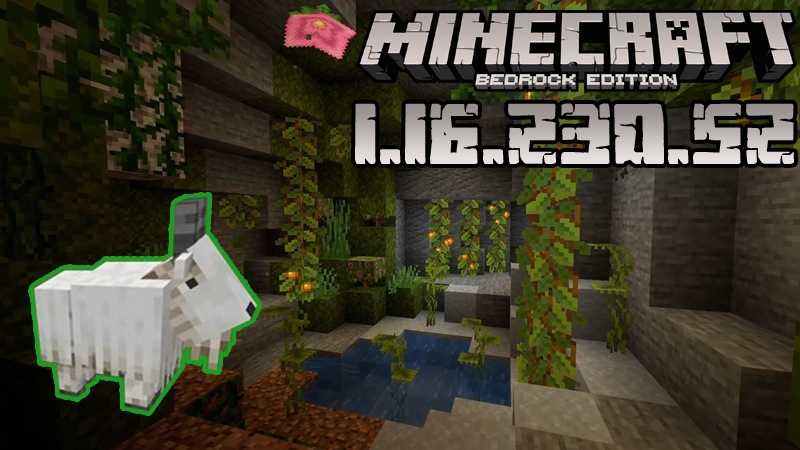 (Rating: {rating_nums} - votes: 7)
With the realease of Minecraft PE 1.16.200.52, the Mojang team is gradually introducing new Experimental Features including awesome new blocks, plants, and most importantly, new mobs for us to enjoy and interact with. Today, in Minecraft PE 1.16.230.52, there is another new mob for us to meet, but this is not the only surprise!

If you are our subscriber and you are regularily trying the free mods and other MCPE downloads we are proposing to you, perhaps you are already familiar with the cutie that the MCPE developers introduced this time, because we already published an article about it, that is Addon Axolotls Replica Concept. Well, now this new character is living in our worlds officially. Oxolotls may spawn either underground or in waters. There are different colors of oxolotls, but the rarest ones are the blue ones which do not spawn in a natural way but are the result of breeding to other oxlotls. Anyway, the chance to obtain a blue one is rather low. The oxlotls are aggressive, but not towards players. They prefer hunting fish and other underwater- leaving creatures. Oxolotls cannot live on the ground. When on land, they dry out very quickly, this process taking up to a few minutes, but if you are fast enough, you may save it by rehydrating it again. If you want to pick them up, you will need a bucket, because this can be done like in the process of catching fish. Their most distinctive feature is that they can fake their death. They usually do this when they take damage. While faking, their health regenerates and they cannot be spotted by other kinds of mobs. Players can tempt oxolotls with tropical fish buckets and bred with the same thing. Unfortunately, these creatures cannot be tamed, but we hope the developers will do something about this in the near future.

This is all we had to tell you about the newly-born mob, but as we already mentioned, there are more surprises for you to explore! A lot of new blocks have been introduced in our Bedrock worlds. These are:

To find deepslate, you will have to look for it below the y=16 layer.
Besides the development of all these new features, there are also the traditional bugfixes and tweaks:

Dear friends, if you are interested in the technical part of Minecraft Bedrock, you will find several bugfixes carried out in that direction too, but for more information, we suggest you watch the video trailer.
Subscribe to our website if you didn’t manage to do his yet and this way you will always be the first to learn about the latest game versions and about the most popular MCPE-related downloads. Have fun!