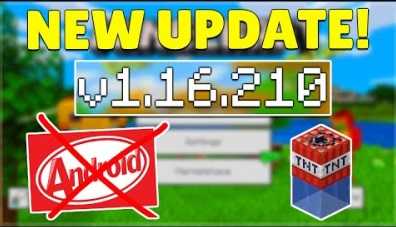 (Rating: {rating_nums} - votes: 23)
Minecraft PE 1.16.210 is the newest full game update. Like Minecraft PE 1.16.220.50 that was released last week, it contains very many interesting changes and fixes. This version will also be interesting for the addon creators and map makers because the Mojang Studios Team did a great job at improving some features necessary for such activities.

By installing this version, you will discover the next changes:

The developers also had a lot of problems to fix. This time, they:

Dear readers, you will be surprised, but this is only a small part of the entire fix list featured in this version. To find out more details about it, watch the video trailer below, or, even better, hit the download button and explore it individually. As we already mentioned at the beginning of the article, there is also a lot to discover in this update if you are a map maker/addon creator.
Please let your friends know about this release by sharing this article with them, and leave feedback.
If you haven’t managed to do it yet, subscribe to our website, and, as we have proved to you today, you will be always among the first to learn about the newest game versions. You will also get the chance to hundreds of popular MCPE mods, maps, and more. Have fun!