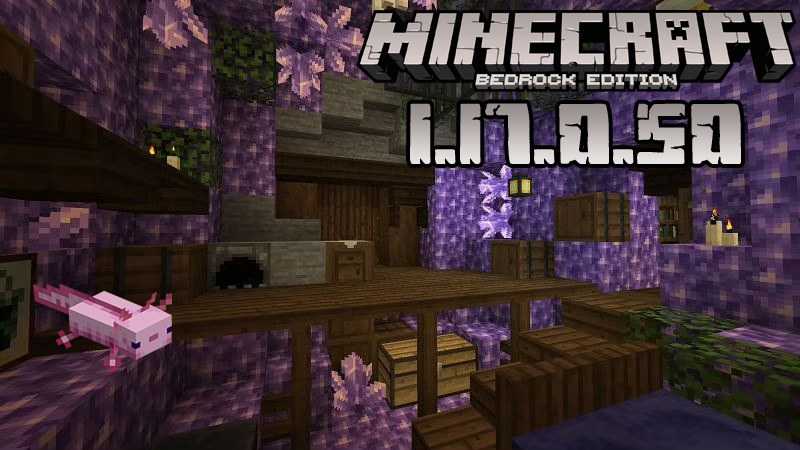 (Rating: {rating_nums} - votes: 55)
All the MCPE fans are happily stepping towards the legendary Minecraft 1.17. We already had the chance to explore so many cool features. The most important ones were the new mountain and caves generations, new ores, snow, cave plants, and cool mobs. Today, in Minecraft PE 1.17.0.50, we will find even more new blocks. We are also happy to inform you that some of the new features that could be enabled through the Experimental Features toggle do not have an experimental status anymore!
Please take into account that this is a beta, so you cannot play with full version users and in Realms while trying it. Also remember that you should back up your current worlds before installing it, otherwise you risk losing them for good.

Starting with this update, our gaming worlds will become even more fascinating thanks to some new blocks. These are:

You will hear special sounds when you interact with all these new blocks, so don’t hesitate to walk, jump, break and perform other actions with them.

At the beginning of the article, we have mentioned that some recently introduced features do not require the enabling of the experimental features toggle anymore. These are:

The status of the rest of the features remains experimental, but the Majong team carried out some interesting changes regards them:

Besides this multitude of great new features and changes, the MCPE developers also managed to fix a lot of problems:

You will be surprised, but this is not all about this beta. The Majong Studios team also managed to develop a number of technical updates, but we will let you discover them individually, or, for more details, you can watch the video trailer displayed below this article.
We hope that you are glad that you are among the first MCPE users to find out about the new beta’s features and you will always be one if you choose to continue following our website. Between the releases, you can also explore the multitude of free maps, mods, textures, and other game-related stuff! Have fun!